How To Set The Divi MadMenu Elements Column Width

One of the features that make Divi MadMenu so flexible when it comes to creating reponsive header layouts is the ability to control the header elements column widths.

In this tutorial I will show how to set the Divi MadMenu elements column widths and control the elements alignment using this feature.

For demonstration we will use one of the demo header layouts that are available with Divi MadMenu.

It has the Search, Cart and two Button elements on the left while the Logo and Mobile Menu elements are aligned to the right.

The Desktop Menu element is in the middle with the menu items centered.

To see how all these elements are aligned and how much space each occupies let’s enable the outlines in the MadMenu Settings->Content->Builder Settings->Show Outlines.

The outlines are enabled not only for the columns but for the elements’ content as well to help with the contents vertical and horizontal alignment.

But in this tutorial we will be focusing on the columns width settings only.

So, here are the columns:

In this tutorial we will explore the Divi MadMenu column width settings by learning how to properly align an element’s content in the middle of the header (in this case it’s the desktop menu items).

While the rest of the elements will be pushed to the left and right sides of the header.

The column width can be set in the Design -> Layout:Elements section for each element individually.

The settings are located in separate tabs each labeled according to the element’s name . 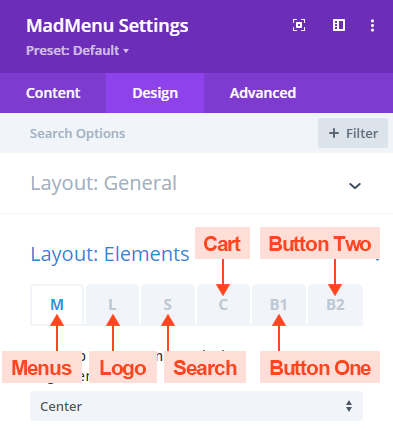 In this particular case we have the header elements aligned to the left and right sides of the header and the desktop menu is centered.

Let’s see how easily this can be achieved using the column width settings.

Initially, when none of the elements are set a specific column width value the header layout looks like this:

By default all the elements are aligned to the left leaving an unallocated space to the right hand side of the elements.

We can change the elements alignment using the Elements Alignment setting in the Design->Layout:General section.

For example, we can center them by selecting the Center option.

This centers the elements but still leaves emty spaces to the left and right sides of the header.

Whereas we need only the Desktop Menu centered and the other elements pushed to the left and right edges.

We can easily push the elements to the left and right edges by simply setting the Desktop Menu element column width value to auto.

The auto value makes the column of the element occupy all the unallocated space pushing all other elements to the sides.

To do that we need to go to the Design->Layout:Elements->M tab (Menus) and set the Menu Column Width setting value to auto. 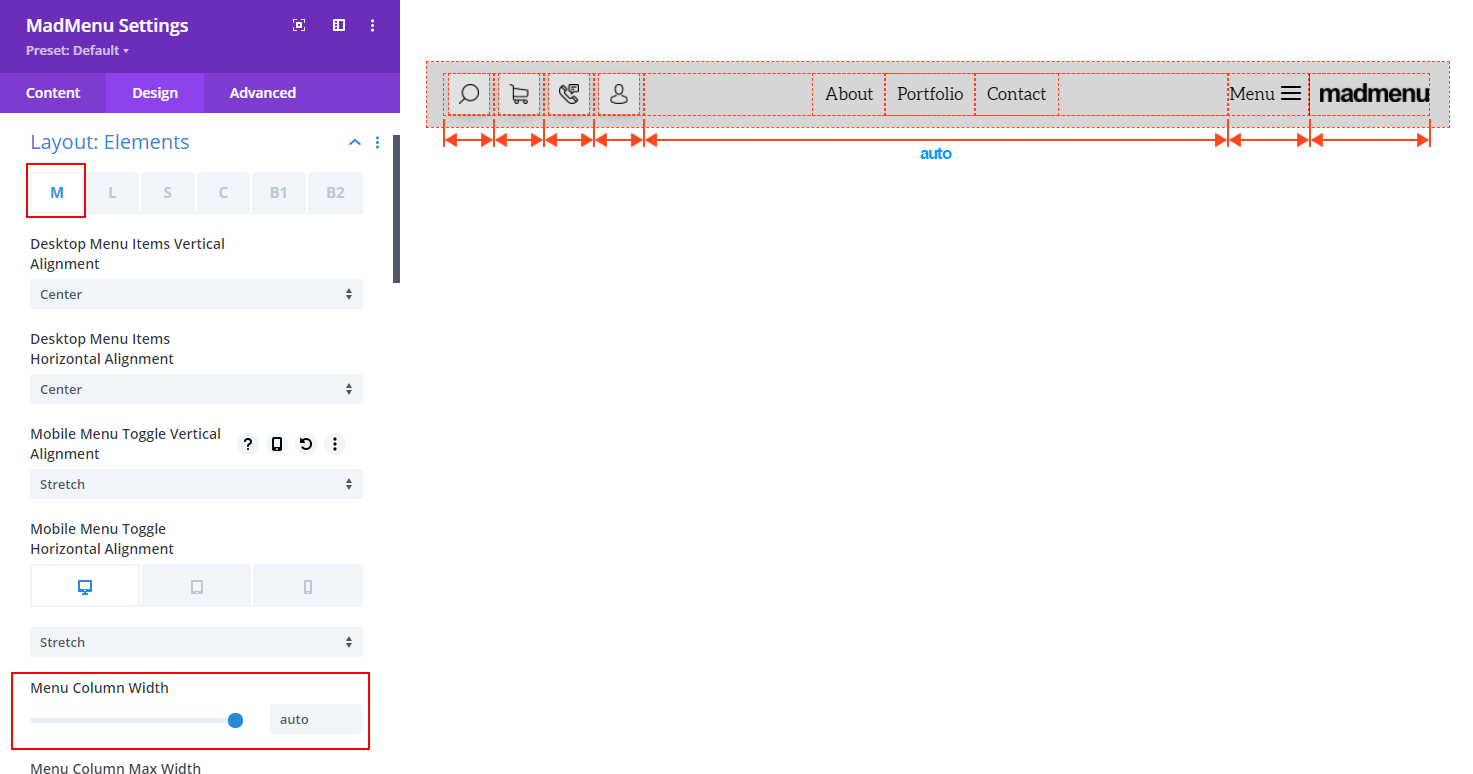 However, that’s not necessarily true because the widths of the header contents on the left and right sides maybe different causing the Desktop Menu element move closer to one of the sides.

To make sure that the desktop menu is perfectly centered we need to set the column widths of the elements on the left and right sides so that their combined widths match each other.

So, let’s set the columns widths of the elements on the left side to 50px each, which makes 200px in total.

These are the Search, Cart, Button One and Button Two elements columns. 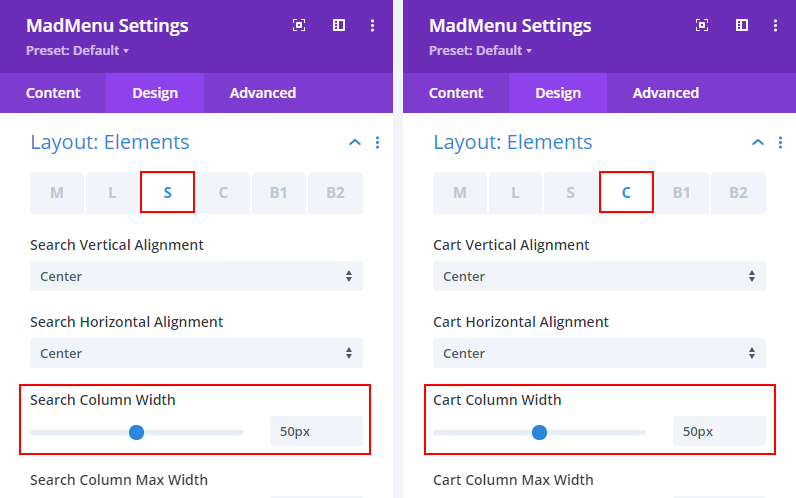 We now need the same combined width of columns on the right hand side as well.

As we already know, the column width of the Mobile Menu and the Logo elements are set in the Design->Layout:Elements section in the M and L tabs respectively.

Now that the header contents width on the left and on the right sides match we can be sure that the Desktop Menu element is centered properly.

In this tutrial we have seen how to set the header elements column width and use this feature to align the Divi MadMenu elements.

And the element in the middle needs to have the column width set to auto with the contents centered.

This diagram demonstrates it all:

You can use the same technique for the tablet and phone header layouts as well, logic is the same.

This is just an example of how you can use the columns widths to align the header elements.

Because it all depends on the content that you want to include in the header when creating it with Divi MadMenu plugin(size of the logo, number of the main menu items, CTA buttons text, etc.).

Hope you find this tutorial helpful. Feel free to share your thoughts and suggestions in the comments section below.

Please confirm your email to complete subscription. Thank you!

Join our mailing list to get notified when the Divi MadMenu module is released! Check out the sneak peek...

Subscribe to get notified when the biggest SALE starts!